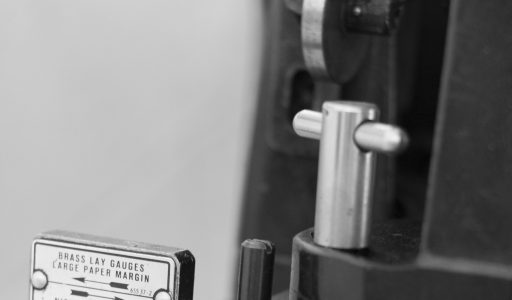 Maggie is our Heidelberg Platen – . She was built in 1965 and looks every bit as gorgeous today as the day she was built. Like all good printing machinery Maggie has quite a personality – we don’t mess with Maggie – those windmill gripper arms can wield a nasty blow to the unsuspecting.

Our Iron Lady is best at diecutting and embossing. She’s still well capable of putting ink on paper, but we tend to reserve that ability for very special occasions.

The design of this machine dates back to 1912. They were built in a factory in Heidelberg, Germany and were revolutionary for their time but the manufacture of these machines was halted during World War 2. When production resumed after the war, the design was tweaked a little and very little changed between the mid 1940’s to the 1970’s. 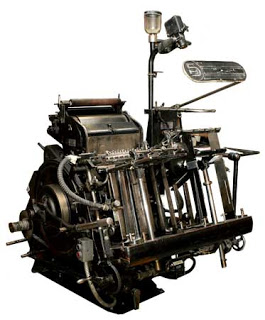 At the time, the Platen was regarded as the most sophisticated and successful printing press available and to own one was considered a dream. The Head of the (then named) Schnellpressenfabrik AG Heidelberg company came up with a revolutionary method of marketing the machines. He had demonstration machines mounted on to trucks and the trucks toured through Europe, pulling up outside of printing plants and demonstrated the machine on actual jobs for the print factory owner.

They were so much faster and quicker to set up than anything available at the time, and the company offered finance arrangements on the presses to help boost sales – a fairly new concept back in those days. By the mid 1970’s, when offset printing started to really take hold, it was estimated that there were around 165,000 of these machines in operation around the world.

I was fortunate enough to find this particular model available for sale a few years ago. She was sitting unused in a garage in Henderson at the time, but since establishing our factory, Maggie has been in daily production ever since. Most of what she does is diecutting and embossing, but ocassionally we put ink on her and let her print the way she was designed to do.